A Cistercian monastery was founded near here in the year 1142. One of the principal tasks of the monks was the cultivation of the grounds and lands around the monastery. In 1278 King Otakar II of Bohemia sent Henry, the abbot of Sedlec, on a diplomatic mission to the Holy Land. When leaving Jerusalem Henry took with him a handful of earth from Golgotha which he sprinkled over the cemetery of Sedlec monastery, consequently the cemetery became famous, not only in Bohemia but also throughout Central Europe and many wealthy people desired to be buried here. The burial ground was enlarged during the epidemics of plague in the 14 th century (e.g.in 1318 about 30 000 people were buried here) and also during the Hussite wars in first quarter of the 15 th. century.

After 1400 one of the abbots had a church of All -Saints erected in Gothic style in the middle of the cemetery and under it a chapel destined for the deposition of bones from abolished graves, a task which was begun by a half blind Cistercian monk after the year 1511. The charnel-house was remodelled in Czech Baroque style between 1703 – I710 by the famous Czech architect, of the Italian origin, Jan Blažej SANTINI-Aichl. The present arrangement of the bones dates from 1870 and is the work of a Czech wood-carver, František RINT (you can see his name, put together from bones, on the right-hand wall over the last bench).

The ossuary contains the remains of about 40 000 people. The largest collections of bones are arranged in the form of bells in the four corners of the chapel. The most interesting creations by Master Rint are the chandelier in the centre of the nave, containing all the bones of the human body, two monstrance beside the main altar and the coat-of arms of the Schwarzenberg noble family on the left-hand side of the chapel. 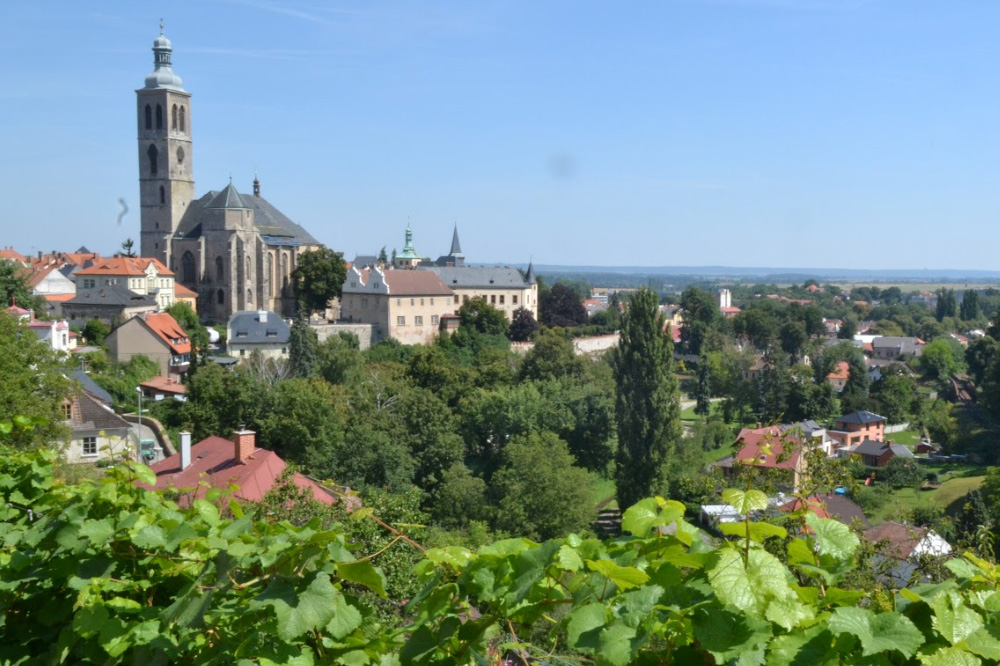 Church of Saint Barbara stands there as a kind of defiance. As a decoration above the left entrance you may see a miner who has turned his back towards the town and holds his clothes in a way that he is actually showing his bottom… That miner was placed there when entrepreneurs of Kutná Hora rebelled against a king, but it can be interpreted as a universal symbol. Barbara had to challenge nearby Sedlec Church and also churches in Prague.

Parléř. In the beginning, the construction processed very quickly. The church was built from sandstone that had been mined in the nearby quarries. The sandstone contains many seashells that you can see even today. Only four years after the construction begun 15 altars were admitted to holy orders and to every altar a special priest was ordered. Till hussite wars the building raised to half of its today´s height, but it remained in that height till 1547, when the middle three-body ceiling was finished. It is necessary to say that until this moment it rained into the church.   Kutná Hora was even running out of silver and thus miners decided to finish the works on the church. In the original project the church had to be two times longer and this asymmetry seems very funny when you are inside of the church. And it is even more funny when you know how miners of Kutná Hora are proud about the church of Saint Barbara.

The sublime chateau of the Chotek family was in its time a prototype of a manor of a new generation. It fully represented the rich and politically influential family and manifested clearly the good taste of its owners, whose sideline was culture, arts and nature. The theatre and the library closed by a cupola like the Roman Pantheon have remained the most beautiful premises of the chateau even up to now.

Kačina is a significant empire style palace in the central region of The Czech Republic. In 1945 it was designated a national property